FILMED USING THE BLACKMAGIC CINEMA CAMERA - ONE NIGHT IN BARCELONA 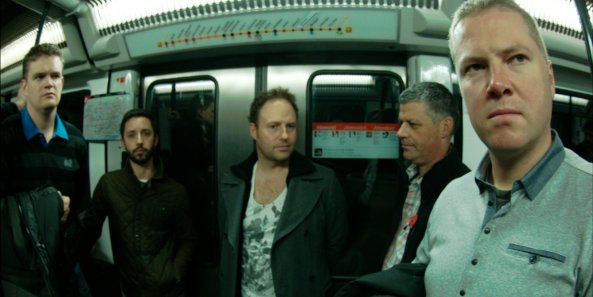 >> Was working on a job in Barcelona and I'd brought the Blackmagic Cinema Camera along to test. Not much opportunity for testing, the job was busy as can be. Shooting all day, long records to be encoded and uploaded. A lot of recording of presentations. Many different cameras being used on-site, compressed formats, quick-turnaround, many records straight to hard drive.

Finished filming around 7pm and some of the crew were heading into town. Barcelona at night is an amazing place. Full of dimly lit bars, character rich streets, wonderful tapas and, scenes like paintings from 100 years ago.

Was I game to film in these conditions… I wasn’t going to get a better opportunity so I brought the camera along.

Challenging shooting conditions. Yet amazingly uplifting and revealing about what could be achieved.

The camera didn’t stand out. Even filming on the Metro and in the train stations didn’t draw much attention. I looked like a tourist out with his mates. The camera looks like a big DSLR. Anything but a cinema camera.

In the bars the lighting was extremely low. So low I wouldn’t have dared to point most cameras, simply because you wouldn’t get an acceptable image. But I was shooting RAW with 13 stops of latitude and really wanted to put the camera to the test. It’s not always about shooting beautiful images, sometimes you need to get what you can with available light.

Filming in one of the Tapas bars was the same. Very low light and again, a situation which, with most cameras, would need to be lit to get a decent exposure. The night out was really a test of low light performance of the Blackmagic Cinema camera.

The film One Night in Barcelona shows these tests. 100% shot on the Blackmagic Cinema Camera; the camera was set to 200ASA except for one of the bar shots and the last shots of the film were set to 800ASA.

Grading was done in DaVinci Resolve. Not complex, critical grading, more setting the exposure and working to pull back detail from the shadow areas. A trained colorist could do so much more…

Included to view are 3 versions:


The filming in Barcelona began as a series of low light tests to see what could be captured with the RAW 2.5K recording which the camera provides. I edited the footage into a 4 minute video as I’m interested to see the shots in the context of an edited piece. Too much test footage makes one stare at images and forget the images are there to tell a story. The night out in Barcelona shows what can be achieved, filming in the darkest of circumstances – the type of scenes that would commonly be found in any feature film ie restaurants, bars, walking down the street. This is a cinema camera. The results, to my eyes, are truly impressive. The images have a film-like quality – the texture, the look, the feel… the soul of the camera.

The Blackmagic Cinema Camera, recording 2.5K RAW, in combination with DaVinci Resolve for image processing, makes a complete system for those wishing to produce high quality images at the resolution needed for cinema projection. To me, that’s a big deal!