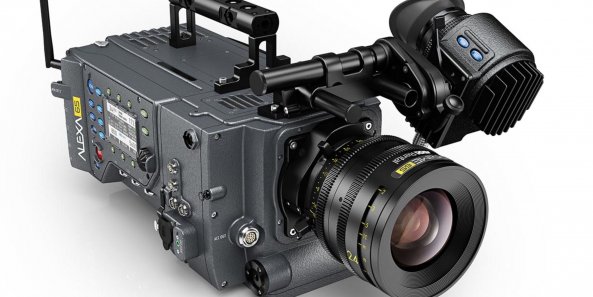 >> Available exclusively through ARRI Rental, the ALEXA 65 has already been supplied to numerous high-profile projects, some using it as the main unit camera throughout production and others using it as a specialist camera for sequences that require extreme levels of image quality.

Top cinematographers are taking advantage of the ALEXA 65s exceptional image quality for major feature films, while updates are announced that will extend the capabilities and appeal of the system still further.

Offering a complete large-format solution for high-end motion pictures, the ALEXA 65 system comprises a 65 mm digital cinema camera, custom-designed prime and zoom lenses, and fast, efficient workflow tools. Interest in the system has spread rapidly, with leading filmmakers pressing to use it on major feature films and IMAX announcing that it has selected the ALEXA 65 platform as its digital option for 2D IMAX productions.

Available exclusively through ARRI Rental, the ALEXA 65 has already been supplied to numerous high-profile projects, some using it as the main unit camera throughout production and others using it as a specialist camera for sequences that require extreme levels of image quality. Rogue One: A Star Wars Story, shot by Greig Fraser ACS, ASC, has been utilizing the ALEXA 65 as its main unit A, B and C-cameras. Before that, Stuart Dryburgh ASC, NZCS captured with ALEXA 65 on The Great Wall, using it as his A and B-cameras on main unit.

The first production to use the ALEXA 65 and to hit theaters was Mission: Impossible Rogue Nation. While the movie was shot primarily on 35 mm film by Robert Elswit ASC, a major underwater sequence was captured with ALEXA 65 cameras and Prime 65 lenses in HydroFlex housings by Pete Romano ASC.

The ALEXA 65/Prime 65 camera and lens combination has proven very successful on other feature films too. Cinematographer Emmanuel Lubezki ASC, AMC used the combination during filming of The Revenant, as did Anthony Dod Mantle ASC, BSC, DFF on Oliver Stone’s Snowden. Further productions to use the ALEXA 65 camera and Prime 65 lenses for selected sequences include Captain America: Civil War, shot by Trent Opaloch; The Huntsman, shot by Phedon Papamichael ASC; and Allegiant: Part 1, shot by Florian Ballhaus ASC.

A scaled-up version of the ALEXA XT IFM-1 in-camera ND filter system is also now available for the ALEXA 65. The new IFM-65 allows ALEXA 65 cameras to use behind the lens, full-spectrum ND filters, optimizing image quality and delivering the full performance of the Prime 65 and Vintage 765 lenses by reducing the risk of multiple reflections that stacked external filter systems can create. The FSND (Full Spectrum Neutral Density) filters used with the IFM-65 provide neutral color balance at all of the eight available densities, from ND 0.3 to ND 2.4.

An exciting new lens option has been added to the already successful lineup of Prime 65 and Vintage 765 lenses for the ALEXA 65. The compact 50-110 mm Zoom 65 weighs just 1.6 kg and produces the same overall image quality as a prime lens, given its impressively high contrast and resolution. ARRIs Lens Data System (LDS) is also integrated into the 50-110 mm Zoom 65, making it the only zoom lens in this format that can supply metadata to the camera.

Other user benefits of the ALEXA 65 update include the same Viewfinder Smooth Mode as featured in ALEXA XT cameras and a programmable monitoring feature called Smart Zoom, which allows users to zoom into the Monitor Out image in any one of five pre-determined areas for more accurate focus assessments.