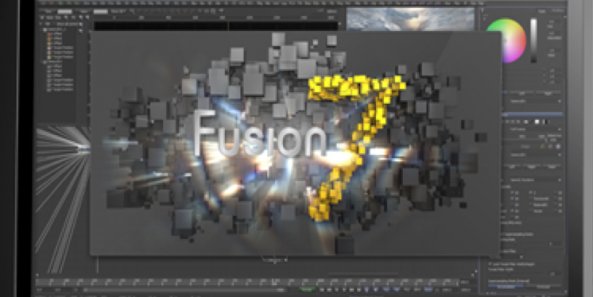 Fusion 7 is one of Hollywoods leading visual effects compositing and motion graphics tools and has been used on thousands of feature film and television projects. Most recently, Fusion 7 has been used on feature films like Maleficent, Edge of Tomorrow, Sin City: A Dame to Kill For, The Amazing Spiderman 2, Captain America, Gravity and more.

Fusion 7 combines the best in motion graphics and high end visual effects compositing into a single application. In addition to its advanced compositing tools, Fusion 7 also includes comprehensive paint, rotoscope, keying, layering and titling tools, along with an amazing particle generator system. It can import geometry from other applications as well as create its own elements, like text and particles, from scratch. Elements can be composited together and quickly output using Fusions GPU accelerated render engine. Multiple renders can be combined in one project to render different aspects of the same scene. Fusion 7 goes beyond just compositing layers and has a full set of creation tools for building objects and scene elements in a 3D system that can handle millions of polygons with complex shading.

“We’re really excited about the acquisition of eye on” said Grant Petty, Blackmagic Design CEO. “Fusion compositing, 3D and motion graphics software has been used on some of Hollywoods biggest visual effects blockbusters. When used together with DaVinci Resolve for editing and grading, Fusion also gives customers the worlds most advanced tools for 3D compositing, visual effects, motion graphics design and more!”

Blackmagic Design is the most progressive company in professional post production today, said Steve Roberts, CEO and founder of eyeon. With their focus on developing the best solutions and a global network of offices, Blackmagic gives customers the products and services they deserve. The acquisition of eyeon will provide greater development and support of Fusion and Generation, where customers will now have more dynamic, comprehensive, and faster solutions for their creative needs.

Fusion 7s great 3D improvements have added to our toolkit, giving us options that greatly expand our ability to quickly put together shots and make final adjustments without the need to go back into a 3D app for changes, said David Stinnett, VFX Supervisor, Blur Studios, Thor: The Dark World and Amazing Spiderman 2. Fusion 7 expands our ability to stay flexible for whatever the job demands.

“The great thing about using Fusion for motion graphics is that you have an unlimited number of ways to create and design shots so you dont have to leave the package to get the job done,” said Dunn Lewis, Motion Graphics and VFX artist. “Fusion can handle it all. With its full true 3D compositing environment, motion graphic tools, Spline editor for precise animation curves, Timeline for timing effects and Node based system for compositing, you can overcome any challenge.”

eyeon will continue to support its customers and expand its sales channels with the added strength of the Blackmagic Design organization. eyeon will also continue developing solutions for the VFX and post production industries, including its flagship application, Fusion.

In addition to Fusion, eyeon develops Generation® 4K, a breakthrough 4K playback system, Generation® AM, the asset management front end desktop for visual effects, Rotation®, an advanced rotoscoping system, Dimension®, a suite of tools designed for stereoscopic and image improvement challenges, Connection®, a bridge between Avid® and eyeon products, and now EPP®, a host of scripts and workflow solutions.