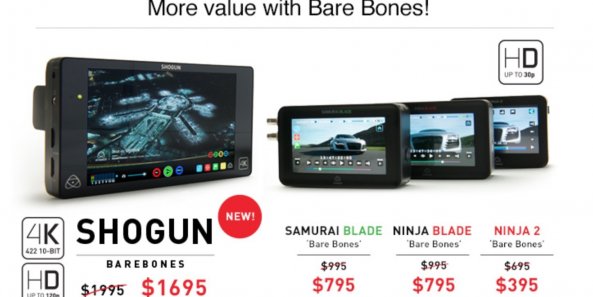 The Atomos Shogun was one of the success stories of late 2014, making 4K affordable, manageable and accessible to more filmmakers and helping to accelerate the changeover from HD to 4K all while making production simpler and more affordable. A new variant of the Shogun called Shogun Bare Bones will soon be available at an even cheaper price point of $1695.

The current Shogun model (MSRP $1995) includes not only the main Shogun unit but also over $500 of accessories to get users started right away (HPRC hard case, AC adapter, SSD media cases, D- Tap adapter, 5200mAh battery, battery charger, XLR breakout cable and SSD docking station). Customers and channel alike have requested a unit only with AC adaptor version, in order to utilise legacy equipment they already own from Atomos and camera products as well as making a second Shogun unit more affordable. In an effort to meet this request and drive 4K adoption even faster, Atomos have announced a Bare Bones version of the Shogun that removes all accessories except an SSD media case and AC power supply, we have also included a high quality soft carry case for protection, all for the low price of $1695. The complete suite of accessories will also be available for $395.

“Shogun Bare Bones is all about accelerating the move to 4K at breakneck speed in combination with the amazing Japanese 4K high quality affordable cameras, allowing customers to utilise legacy Atomos accessories they already own.” said Jeromy Young CEO of Atomos. “We still expect the full Battle Ready Shogun loaded with accessories to be popular but now users can decide what makes sense for their first and second 4K camera rig.”

“We liked the idea so much we decided to extend it to the entire Monitor/Recorder range. Ninja 2 at $395 is a steal, it is our original flagship product and our most successful, Ninja Blade and Samurai blade have the 5 SuperAtom IPS 325PPI monitor, calibration, WFM, Apple ProRes and Avid DNxHD and are bare bones for $795.”

Atomos expect Atomos Shogun Bare Bones to be available from resellers in May 2015. The accessories and HPRC case will be available separately for $395 for Shogun and $195 for Ninja Blade and Samurai Blade.

About Atomos Shogun
The latest 4K cameras are arming the Pro Video world with amazing sensors, but falling short when it comes to Recording & Monitoring capability. Shogun completes the solution for professionals, combining advanced Record, Play, Monitor and Edit capability that can be added to existing cameras. Shogun delivers 422 10-bit ProRes and DNxHR/DNxHD for Apple and Avid workflows, a 7 1920 × 1200 IPS 320ppi monitor with an advanced suite of setup tools (3D LUTs, 2:1/1:1 zoom, focus assist, vectorscope, false color and others), XLR audio monitoring with 48V phantom power, playback capability on screen or out to a larger TV and editing capability on the fly with cut in/out points and favourite/reject tagging. Price point is MSRP US$1995 for the Battle Ready edition including over $500 worth of accessories or US$1695 for the Bare Bones unit only edition.